As an undergrad at the University of Florida, I had the good fortune of spending a year learning creative writing from the late novelist Harry Crews. If you’ve never read Harry, you should. He was the living embodiment of “Southern Gothic,” and if he hadn’t existed, Flannery O’Connor would have created him.

He was also a prolific and accomplished writer, so when he told us something, I tucked it away. Some of his favorite things to say were, “Big words mean little things,” “If the room is blue, just tell me it’s blue. Don’t tell me how that blue room makes you feel. I don’t give a [crap] how it makes you feel,” “Miss del Valle this is wretched,” (that might have just been to me, though) and, most importantly, “The fewer words you have to work with, the more important each one is.”

For many of us, social media has become the primary way in which we communicate both personally and professionally, but few of us know how to write for each platform. Intellectually, we know that what works in a full blog post is never going to fit into 140 characters, but, by gum, that doesn’t mean we won’t abbreviate, symbolize or “emojify” to get as many “words” into that 140 characters as we can to make sure we get our point across.

We’ve all seen those tweets. You can’t figure out where it started or why it has clapping hands or even what the hashtag means. You can’t get past it fast enough. Or how about those Facebook posts with the “See More …” link, but no photo? You click the link to discover it goes on longer than a screen, and no matter how good a friend she is, you’re not scrolling just to find out whatever her news is.

It’s not just your friends or family. It’s celebrities, public figures and companies just not getting that you not only need to tailor your message for each platform but that you often need a different voice to go with it.

Just as each writing genre has its own rhythms and requirements, so does each platform.  You can’t tell an in-depth, epic story in haiku form, while the less said about the “Cavemen” TV show the better, so don’t just truncate a Facebook post to fit into a tweet. It doesn’t work and, what’s more, it looks like you’re disengaged. Why would your audience want to engage with you if you’re not interested in communicating with them?

The best way to think of your voice on social media is as a funnel. You have one site where you can fully explore your thoughts and points of view. Whether it’s a blog or your corporate site, this is where your strongest voice should be heard. Your primary site should be your audience’s ultimate destination and should have the fullest representation of your personal voice. From there you can refine that voice and find the essential version of it for each social media platform.

Below is a primer on what to know, and keep front of mind, when composing messages for the major social media sites.

Twitter: Think of Twitter as the haiku of social media. Even though it recently expanded to include 280 characters, minus handles, hashtags and links, it still requires precision. Keep your tweet limited to one very clear point. If you need more than one, tag it as one in a series, but if you need more than two or three, rewrite your tweet. Twitter feeds fly by in real time, so your tweet won’t get any preferential treatment, unless you can get it retweeted so it keeps showing up in people's feeds. And the only way you can do that is to make a bold, simple, declarative statement.

But still, use full words. Don’t take a 50-word status update from Facebook and remove all the vowels. Yes, people can still read it, but only if they care enough to decipher it in the first place. “Ur” has its own meaning beyond “your.”

Rather than reducing real words to Martian-speak,  just remove the ones you don’t need. Go Balkan and drop articles.  As any Slav will tell you, they’re meaningless and those two, three or four characters saved by dropping “a” “an” and “the” can add up.

Of course, “Twitter essays” have become popular, and when done well can produce their own news cycle. As with any essay, though, write it ahead of time and be careful how you publish the excerpts.  Each tweet should still have a complete thought, even if that thought is: 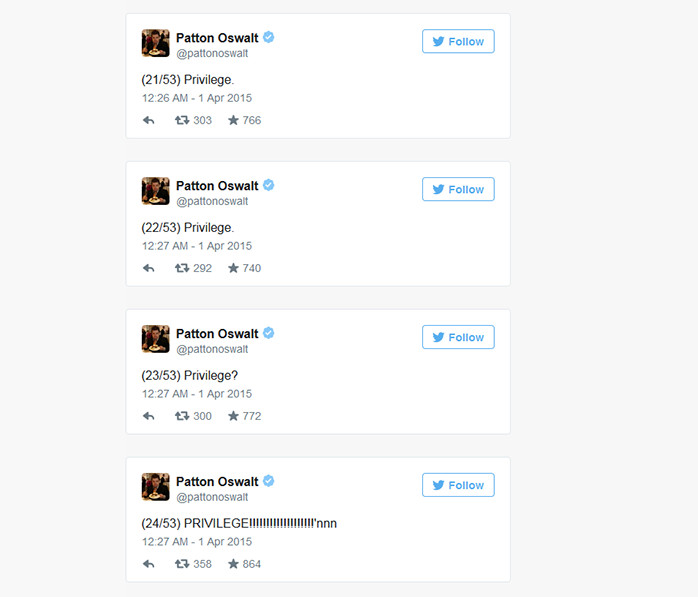 Facebook: Facebook has a lot more flexibility, and visibility, than Twitter. You can write longer posts without worrying about how many characters a link or photo will take, and people tend to scroll through their feed slower. But that doesn’t mean you should post 1,000-word essays willy nilly. There are still limits, and those are usually one screen worth of text with an image. No one likes to scroll.

Of course, screen-size varies, so you still benefit from brevity. But Facebook also encourages a lot more conversation, so use your status updates as open-ended communication whenever possible. If you’re just using Facebook as an activity calendar or a way to let your followers know how awesome you are, they’ll start hiding your posts and unfollowing you because Facebook already makes people feel bad about themselves.

Facebook allows you to attach notes and documents that are easy to access, if necessary, plus you can always link to third-party sites. So keep your status updates short, sweet, engaging, provocative, funny and endearing, while avoiding droning, preening and excessively self-congratulatory.

And if you want people to pay attention, add a picture. A strong image will set the tone to what people will expect from your status update – and if you’re asking them to read several paragraphs, let them know why.

LinkedIn: As LinkedIn grows, it takes the best features from the other more “social” social media outlets, like WordPress, Facebook and Twitter, and refines them for a more corporate audience. People view LinkedIn as their first stop to update them on their business news and contacts.

With everyone able to publish Pulse stories, you can set up LinkedIn as your primary blog location, if you don’t already have a corporate website, or use it to publish shorter versions of longer content and drive to your main site. With the publishing option, you can present as full a version of your voice as you want or you can use the status update option to send out quick hits to your network and followers.

Instagram: People are much more visual by nature and Instagram meets that need. Like Twitter, it recognizes hashtags – unlike Twitter, you can write longer text – but unless you’re Humans of New York, people likely aren’t reading your message, although a good, funny hashtag is always a good idea. But accounts like Humans of New York are great examples of how you can drive longer content in a visual medium, if you use the right image.

Knowing the rules of each social media platform helps you find your truest voice across each one. You have a different voice when speaking with a spouse than you do with a friend, co-worker or manager. Social media is no different. Sometimes your true voice follows the rules, sometimes it doesn’t, and sometimes it takes full advantage of a medium’s limitations. But knowing the rules, and what works best, helps you know when, or even if, you need to break a rule or two to be heard.

This site uses Akismet to reduce spam. Learn how your comment data is processed.